Post Paris Attacks: Countering Terrorism from the Intelligence Production Side

On July 10, 2001, FBI Special Agent Kenneth Williams of Arizona Field Office wrote a five-page memorandum about a possible attack on the United States by Middle Eastern students enrolled in flight schools in the country.  (Van Natta Jr. and Johnston 2002).
Williams reportedly came up to this conclusion after interviewing some Arab students who had expressed great animosity towards the United States.
Senator Richard J. Durbin (D),  after the closed-door congressional hearing where Williams testified before the Judiciary Committee,  was surprised when he learned that the memo did not go up to the Bureau's chain of command and  was “never treated seriously, never circulated, never analyzed, nor referred to the CIA.”  (Van Natta Jr. and Johnston 2002).
The reason why the Phoenix Memo did not get its proper attention was due to the weak analytical capability of the Federal Bureau of Investigation to process raw intelligence report that time.  Director Mueller admitted this handicap when he said, “What did not happen with the memo from Phoenix points squarely at our analytical capacity.  Our analytical capability is not where it should be…” (Mueller 2002).  Unlike the Central Intelligence Agency, the FBI on pre-9/11 era was a reactive agency being a law enforcement unit and not a proactive on its terrorism coverage like the CIA.
The FBI, by not having competent intelligence analysts devoted to counter-terrorism matters, had failed to thwart the terrorists’ attacks on the homeland.  This fiasco had triggered a major overhaul of the US Intelligence Community apparatus and most of the upgrade had been directed to the hiring and training of new pools of intelligence analysts. The necessity to train new recruits and develop others to become adept in their field are crucial to the success in the war on terror.  Since then, each USIC member had elevated its fight against terrorism to the next level by improving the capability of its personnel to produce critical analysis and provide timely intelligence to the end-users in the federal government.
Why are the intelligence analysts important in counter-terrorism operations?  The intelligence analysts—whether in the military units or civilian agencies—create a clear and big picture of the terrorist groups' intents and plans by piecing together the little information collected via overt sources and covert methods.  The analysts “sift through the giant haystack of information . . . to find the little needles that are really important.”  (Hess 2001).
Moreover, the intelligence analysts perform link analysis and timeline analysis to monitor the trends of terrorists activities/operations at home and overseas.  The similarities of data obtained from open source intelligence (e.g., newspapers, think-tank reports, speeches, the internet) and from covert sources (e.g., action agents, wiretaps, surveillance) would show patterns and trends, which could become a baseline in predicting future attacks.  The threat analysis helps the decision makers in the government, especially the President of the United States and the National Security Council, prepare a proactive national strategy and anti-terrorism policy to address the threats of radical Islamists here and abroad. Similarly, the threat analysis gives the top brass in the military and the heads of federal law enforcement units the opportunity to prepare tactical counter-measures to preempt the destabilization plans of the enemies.
What had happened in Paris on November 13th was the best example of a government who had failed to act on the available intelligence. It was reported that the Iraqi government warned France of imminent attacks from the Islamic State of Iraq and Syria (ISIS).  Could we say that the info from the Iraqis was “never treated seriously, never circulated, never analyzed” just like the Phoenix Memo?
The intelligence analysts should be aware of the local, national, and global threats vis-à-vis requirements of the policymakers to produce timely and actionable intelligence. To accomplish their tasks, the analysts must lay down the hypotheses that need to be confirmed and disproved—including the plausible hypothesis and deception hypothesis. Some hypotheses lack immediate support (i.e., intelligence gap), and this vacuum needs to be filled-in to get the full picture of a threat.  (Heuer 1999)
To predict future events, the intelligence analysts explore and evaluate the collected information through the process of assumptions and interpretations using their hypotheses as guides. And the hypothesis that has the highest probability or possibility of occurring is passed on to the decision makers for appropriate action. The analysts continue to monitor the hypothesis they chose even as new information comes in daily from the field. The fresh information collected from covert and overt sources may open new possibilities or probabilities.  As such, the analysts may change or modify their initial predictions or may suggest an acceleration of occurrence of such events to the end-users.
The capability of the intelligence analysts to draw hypotheses from raw information and come up with a critical interpretation that could predict possible or probable terrorists’ action is vital to the homeland security. With the recent threats from multi-national terrorists such as ISIS and al-Qaeda, the work of the intelligence analysts has never been so critical in the protection of the United States government interests and installations, personnel, and American citizens overseas.   sDg.

Jos Ilagan
Jos Ilagan is a former Intelligence Officer and spent eight years in counter-terrorism operations. He is also an ardent student of geopolitical conflict and writes immensely on the subject of global terrorism and security. He holds a bachelor degree in Political Science and a Master in Public Administration. He also studied law.

Then and Now: The Goals and Objectives of Terrorism

Jos Ilagan
Jos Ilagan is a former Intelligence Officer and spent eight years in counter-terrorism operations. He is also an ardent student of geopolitical conflict and writes immensely on the subject of global terrorism and security. He holds a bachelor degree in Political Science and a Master in Public Administration. He also studied law.

An Ode to a Ghost Warrior 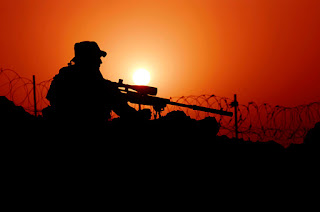 (Sniper, courtesy of Wikemedia Commons)
"Come unto me, all ye that labour and are heavy laden, and I will give you rest."
- Matthew 11:28
Can’t loosen the cast
That binds my warrior’s past.
Thoughts of memory lane
Keeps coming back again,
In pain.
With deeply sighs
I closed my sniper eyes.
My tears flow down the drain,
Vain thoughts I can’t contain;
Oh, pain.
Sadness that’s unseen,
Yet deeply hurts within.
Sorrow my heart does fill.
Oh, distraught mind that kills;
Be still.
Tried hard to forego,
But couldn’t let go.
Nay, wounds that never heal
And pains I can’t conceal
Stay still.  sDg.
Posted by Jos Ilagan at 8:34 PM No comments:

Jos Ilagan
Jos Ilagan is a former Intelligence Officer and spent eight years in counter-terrorism operations. He is also an ardent student of geopolitical conflict and writes immensely on the subject of global terrorism and security. He holds a bachelor degree in Political Science and a Master in Public Administration. He also studied law.
Newer Posts Older Posts Home
Subscribe to: Posts (Atom)